APRIL NEWSLETTER IS OUT NOW!

Our April newsletter is now available to read, full of our latest news and events. Villani Piano Quartet is holding the first concert of their Saint Heliers Concerts Series on April 9. Also we have our casting for Dante's play on April 20 and anyone can give it a go, last year was a huge success. Also, our School Holiday Programme is April 26-28 and you are still on time to book your children. Enjoy reading the articles about literature, music and much more. Happy Easter! Buona Pasqua! 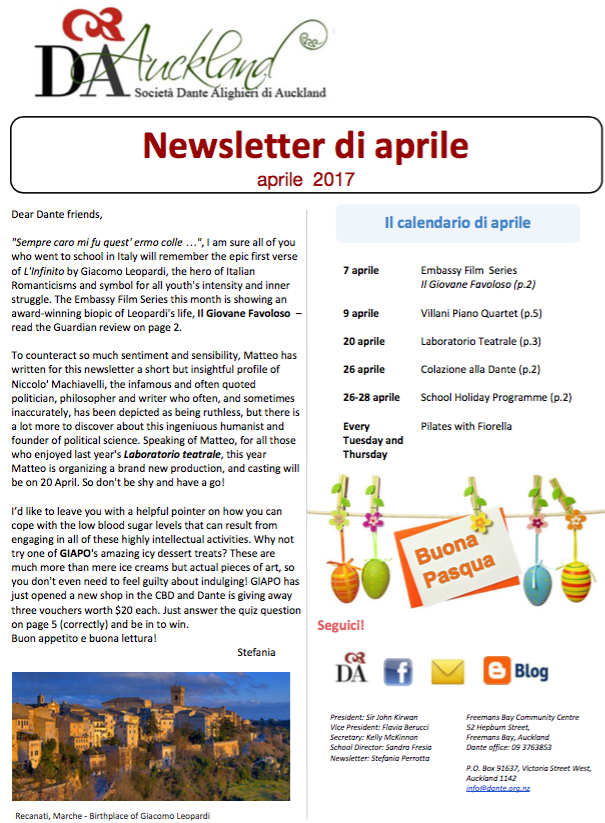 Posted by Dante Auckland at 3:50 PM No comments: 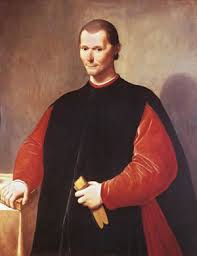 
The Florentine Niccolò Machiavelli is best know for a short treatise on applied political science, Il Principe (The Prince, ca. 1515), an analysis of the technique to be used by monarchical ruler to gain and keep control of a state. In addition to The Prince, Machiavelli wrote a series of Discorsi sulla prima deca di Tito Livio (Reflections on the First Ten Books of Livy), containing analogous reflections on the relation of the state to its citizens under a republican government; the Istorie fiorentine (History of Florence) and a semi-fictionalized biography of a four-teenth-century Lucchese tyrant, Castruccio Castracane. His fictional production was much smaller, and consists principally of two plays, La Mandragola (The Mandrake) and Clizia, plus the short story of Belfagor the Arch-Devil, also reproduced in the volume Italian Stories, A Dual-Language Book available at the Dante’s Library (please ask Matteo if you’re not sure where to find it).


In The Prince, Machiavelli analyzed the procedures to be followed by a ruler, solely from the point of view of their effectiveness, and without regard to the traditional ethics. From this apparent neglect of morality, many readers of Machiavelli have concluded that he was favorable to dishonesty and deceit; especially in Elizabethan times, he was regarded as a base scoundrel who counseled the vilest treachery and the blackest wickedness. In actually, Machiavelli’s analysis of statecraft, both under a monarch in The Prince and under a republic in the Discourses on Livy, was based on dispassionate, scientific analysis of the facts as they exist, not as they are supposed to be according to the prescriptions of moralists. Something of this same objectivity appears in his treatment of a traditional, folkloristic theme in the tale of Belfagor. In narrating Belfagor-Roderick’s marital adventures and ultimate discomfiture, Machiavelli does not take sides, but simply presents events as they happen. Thus, the character of the demon when he assumes the shapes of a man is shown to be inevitably conditioned by the innate drives and passions of the human race. 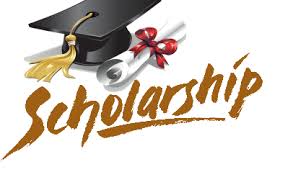 Dante Alighieri Society of Auckland is offering a tuition fees scholarship  to one student to support his/her study of Italian at the University of Auckland. The scholarship will cover tuition fees for two courses, Italian 106 and Italian 107, to be taken up in 2017-2018. At this link you can find more information about the courses.

To be eligible, you must be a New Zealand citizen or permanent resident, and be 25 years old or younger.

To apply, please send an email to info@dante.org.nz by 31 March 2017 with an up-to-date CV, a written statement (that may include details of your proposed future study and career, any relevant work experience, interests and/or community involvement, your achievements, how this scholarship would be important for you) and one written reference.
After all applications have been assessed, suitable candidates will be invited for an interview with Dante Alighieri School Committee.
Posted by Dante Auckland at 10:42 AM No comments:

MARCH NEWSLETTER IS OUT NOW!

Our March newsletter is out now full of news and upcoming events. March will be a great month for us: we have the International Design Day at the University of Auckland on 9 March, the viewing of the film Fuocoammare on 10 March, the Colazione alla Dante with special guest Bruno Ferraro on 25 March and finally the children's day "Incontro con bambini italiani" on 26 March. For more info, read our newsletter. You will also find a great report of our AGM at Segafredo Zanetti last month and the announcement of the Dante Committee for 2017. 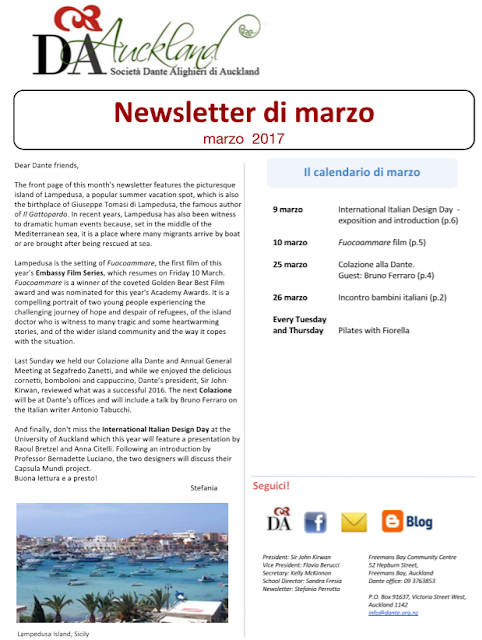 Posted by Dante Auckland at 3:34 PM No comments: